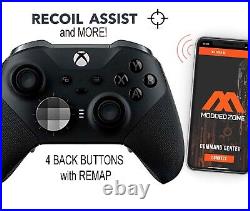 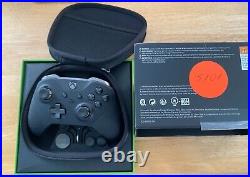 Brand new ModdedZone Xbox Elite Series 2 Controller. [RAPID FIRE] The Rapid Fire Mod automatically press the fire trigger at the user's configured speed, turning single shot and semi-auto weapons into fully automatic. The Rapid Fire mod can also be used with fully automatic weapons to control the rate-of-fire, reducing the weapon's recoil, increasing accuracy. [BURST FIRE] The Burst Fire automatically press the fire trigger a certain amount of times, stops for a defined period and repeats while the fire trigger is pressed. The Burst Fire mod can be used on all types of weapons to reduce recoil and increase the weapon accuracy, specially helpful against targets at middle and long range.

[AKIMBO] The Akimbo Mod allows fire dual-wielding weapons by just pressing the regular fire trigger. With dual-wielding weapons is required press both the left and right triggers to fire the weapons, which is not always convenient. The Akimbo Mod eliminates the need to press both triggers and can turn semi-automatic weapon into fully-auto with the build-in rapid fire option. [DROP SHOT] The Drop Shot Mod makes the character automatically go to prone/crouch stance as soon as the fire trigger is pressed. The player can keep the thumb on the stick to aim and fire upon the opponent at the same time that the player's profile is reduced, making more difficult for the enemy hit the shots.

[JUMP SHOT] Specially indicated for close range combats, the Jump Shot Mod makes the character continuously jump while the fire trigger is kept pressed. The player can keep the thumb on the stick to aim and fire upon the opponent at the same time that makes extremely difficult for the enemy hit the shots.

[QUICK SCOPE] The Quick Scope Mod is activated by quick tapping the ADS trigger. When activation condition is met, the mod automatically aim down the sights, hold breath (if applicable), wait for the user's configured time and then take the shot.

The delay time is weapon dependent and must be configured precisely to mitigate the "bloom" effect and achieve perfect accuracy shots. [AUTO HOLD BREATH] The Auto Hold Breath Mod automatically hold the breath when aiming down the sights, significantly enhancing the accuracy of sniper shots.

The option to activate the mod only with full press of ADS trigger allows aim down the sights to track the target and activate the Auto Hold Breath, by fully pressing the ADS trigger, only when ready to shot. [AUTO SPRINT] The Auto Sprint Mod can be configured to automatic start sprinting by just pushing forward, or double tapping forward, the movement stick. This feature makes the gameplay experience more fluid and enjoyable, as repetitively press down the stick becomes quite tiring over long gaming sessions. Advanced Anti Recoil Assist Mod compensates the weapon vertical recoil by automatically offsetting the aiming stick position to the opposite direction which the weapon is moving when firing, while still allowing the player to use the thumbstick to track the target.

This item is in the category "Video Games & Consoles\Video Game Accessories\Controllers & Attachments". The seller is "userid16" and is located in this country: US. This item can be shipped to United States.